Medical information service M3 sought deeper insight. The Japan-based company surveyed 763 of its member physicians between March 28 and April 3, to gauge their thoughts. As in the scientific publishing community, responses were divided. When asked about journals boycotting research submissions as a form of sanction:

To ban or not to ban: it’s complicated

To date, just one scientific journal, the Journal of Molecular Structure, from publishing giant Elsevier, has barred manuscripts from Russian institutions. The journal’s editor-in-chief noted that the Russian government supports such institutions, and vice versa. The ban was not on individual scientists and was only on humanitarian grounds. The former editor of UK medical journal The BMJ stated his ongoing strong opposition to publication bans.1

Other journals and publishers range from opposed to unsure about boycotting Russian research paper submissions.

Many of the responses in the M3 survey echoed the nuances of the debate. Among voices in favor of publishing bans:

Some also cited that the boycott helps alert the Russian public to its governments’ wrongdoings. Among those opposed to research boycotts, many emphasized the impartial nature of science, sometimes with caveats added:

One respondent also noted they didn't understand why there was only focus on the Russia–Ukraine conflict and not on other conflicts.

Among the undecided, one doctor noted that Russian medical research could save lives. Another questioned where the line can be drawn between ideals and reality.

How far should restrictions go?

The other main survey question asked not only about Russia, but for a country involved in any such invasion or conflict, how much is it acceptable to restrict medical and other research activities as a form of sanction?

In contrast, 37.1% responded that there should be no restrictions whatsoever on research activities. 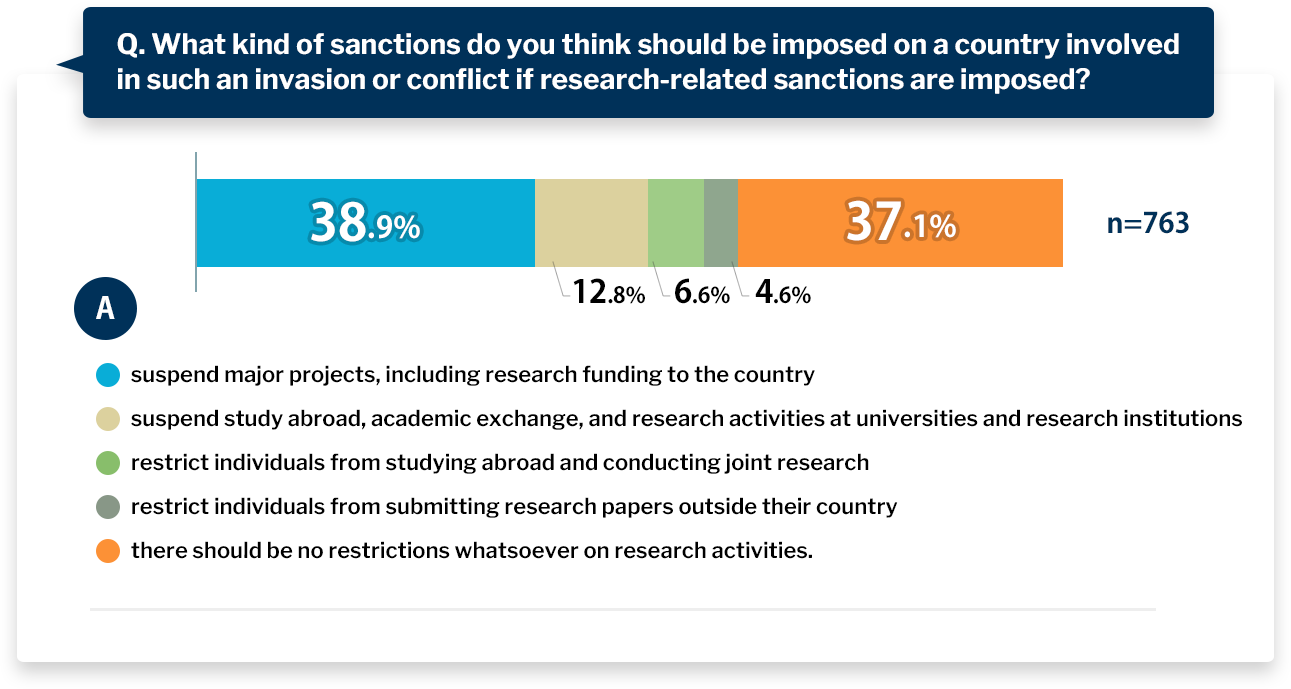 On suspension of major projects, respondents commonly cited the connection between research and the military as justification for restrictions. One doctor flatly stated, “Those who invade should be thoroughly punished.” Another noted that such action is temporarily unavoidable, but most ordinary researchers are blameless.

Specifically on restricting submission of academic papers, a respondent suggested giving more consideration if there are, for instance, anti-government statements at the outset of a paper.

Among those opposed to any restrictions, responses were similar to those for the first question on whether to ban, showing unconditional respect for science:

There was even empathy toward Russian counterparts, as one respondent stated, “Russian researchers are not responsible for war. On the contrary, I think they are victims.”

The M3 survey made clear that even in Japan, a strong U.S. ally and historically on poorer terms with Russia, there is prevailing respect for science despite harsh disapproval of Russia’s actions in Ukraine. Some, however, viewed Russia’s actions as warranting broad punishment, especially considering the possible connection between scientific research and the military.

"This survey reinforced that, in most cases, science is sacred and can overcome all political and social differences,” Koji Yamashita, CEO of Edanz Inc (part of the M3 Group) says. “We’ll continue to offer author support services to facilitate global dissemination of good scientific research."

Further dialogue and airing of views may yield longer-term understanding of the value and global position of scientific research. As one internist stated, “Discussion is the key.”

About M3 and Edanz

M3 operates m3.com, a specialized web portal for medical professionals that delivers healthcare-related information to over 270,000 physician members in Japan, offering marketing and clinical trial services. M3 operates in 10 of the countries with the largest healthcare systems, including the US, UK, France, China, Korea, and India, with over 5 million physicians as members across its global platforms.

Native-English Experts are available in your field of study