The results section is possibly the most important section in your paper. In this section you will describe the main findings of your research, which is what everyone who is going to read your paper wants to know about. Also, whatever findings you obtained will determine how the introduction and discussion sections are framed, what target journals you can consider, and what direction(s) your subsequent research needs to take.

Look at the data
The easiest way to approach writing a results section is to consider all of your findings and what they mean or suggest. You will already have analyzed your data and probably also generated a number of figures and/or tables to show it in a clear and concise manner.

Later tips in this series describe some important considerations to keep in mind when preparing display items and performing statistical analyses, so I won’t go into much detail on those processes here. However, it is important to remember that graphics are important components of the results section, and therefore, that there should be no redundancies or duplications among the text, figures and tables. Put simply, if something can be more clearly shown in a figure or table than explained in the text, then use a graphic and refer to it briefly in the text; if something can be easily summarized with text, then there is no need for an additional graphic showing the same thing.

Once you have a clear idea of what results you want to include and what each of them shows, you should assemble them in a logical order to make a ‘story.’ You will have already described your hypothesis or research question(s) in the introduction; use the results section to lay out all of the evidence you have gathered, building up a solid case to support your hypothesis or to exclude alternative explanations. Each different finding should have its own subsection, beginning with a subheading in the present tense. These subheadings should match those in the methods section and the headings used in figure/table legends.

The results themselves should be described in the past tense, like the methods. The more types of evidence you can provide for a given hypothesis (and the less ambiguous these are), the more irrefutable your conclusions can be. Resist the urge to discuss the implications of findings or go into detail about what they mean—that is what the discussion section is for. Rather, present the evidence and let the reader draw their own conclusions.

Make comparisons
Results sections frequently involve comparisons between a test sample and a control, or between before and after time-points, so you should be aware of some common errors made when describing comparative results. For example¸ the sentence “Expression levels of p53 in smokers were compared with non-smokers” should actually be “Expression levels of p53 in smokers were compared with those in non-smokers.” The critical point here is the placement of “were compared” (or in other situations, “compared with”): if the comparing term appears between the words describing the two items being compared (here, p53 levels in smokers and p53 levels in non-smokers), then enough information needs to be provided either side of the comparative term to make it absolutely clear what is being compared. An alternative to this is to place the comparative term before or after the words describing the items being compared: for example, “Expression levels of p53 in smokers and non-smokers were compared.”

While still on the subject of comparisons, it is important to remember that relative terms, such as “more,” “higher” and “faster,” require an accompanying “than” clause to explain what this change is relative to. For example, in the sentence “transgenic mice showed higher levels of cortisol” it is unclear what these levels were higher than; thus, a “than clause,” such as “than control mice,” is required.

The figure below, showing a couple of excerpts from the results section of paper published in The Journal of Clinical Investigation (doi:10.1172/JCI37155; reproduced with permission), shows some of the important components of a results section. 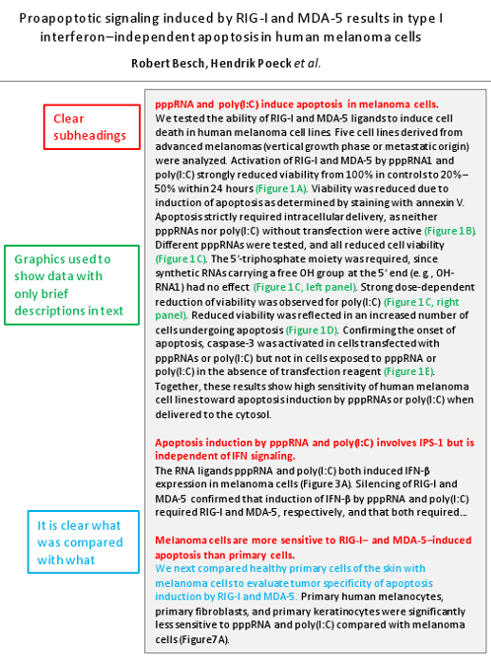