The methods section of your manuscript should contain sufficient information for a capable researcher to accurately repeat the experiments you describe. If essential information is left out, the exact conditions might not be replicated, leading to different results, potential misunderstandings, or worse, accusations of falsification. Thus, the methods section needs to be comprehensive.

The methods section should be written in the past tense. For example, “sections were stained with…” and “data were analyzed using…” An exception to this is references to tables or figures in the manuscript, for example “The patients’ clinical characteristics are listed in Table 1.”

Another exception is when providing a definition or describing the current consensus on something. For example, “the cells were subjected to hypoxia, which induces HIF-1 expression…” Here, although what was done is described in the past tense, the fact that hypoxia induces HIF-1 is described in the present tense because it is a general phenomenon not limited to the present paper.

The suppliers of all reagents and the manufacturers of all equipment used should be listed. Some journals also request that the locations, that is, city, state (if in the USA) and country, of these companies are provided. When talking about equipment, kits, or reagents, you should use familiar terms to define the particular item you are describing, rather than just a manufacturer-specific term or model number.

Methods should only be included if the results of the described experiments are provided. If an experiment you performed didn’t work, or didn’t provide the results you needed, and you have opted to leave the results out of your paper, then there is no need to describe the associated methods.

Use appropriate subheadings to separate materials and methods with different purposes. If available, use a Supplementary Methods section to provide detailed information so that the printed methods section can be kept brief. Novel techniques need to be described in detail so that they can easily be replicated, but established and commonly used techniques can be referenced as long as any variations between the method used in the present study and that described in the cited study are clearly described. Above all, be precise and ensure that all units are correct and all conditions (such as times and temperatures) are clear.

Finally, if any statistical analysis was performed to assess the significance of your data, describe the statistical methods used, including the threshold(s) selected for significance, at the end of the methods section.

The figure below, showing a couple of excerpts from the methods section of paper published in The Journal of Clinical Investigation (doi:10.1172/JCI37155; reproduced with permission), indicates the important components of a methods section and how these fit together. 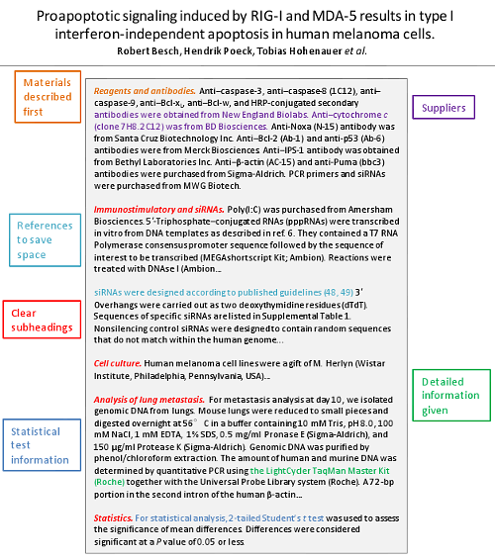